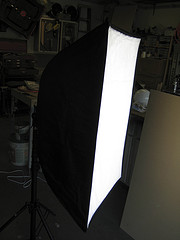 A little time ago I went to a Clay Blackmore workshop on portrait lighting with continuous lights. He had a really nice lighting set up which consisted of a couple of softboxes that were made up of Westcott spiderlites. Having come from a background of using strobes this was new to me, but I like the options and the ability to move my lighting around and see exactly what my final effect would be without having even take a shot. So I set out to create my own spiderlite kit. So I pulled together a couple of softboxes I already had and made a modification to allow a new spiderlite fluorescent set up.
(full instructions at Flickr) 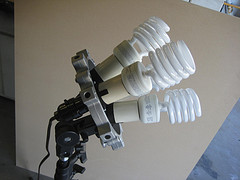 First, I started with my speed ring and traced out a circle on a piece of aluminum. I cut out the aluminum with some tin snips and then sanded the edges. After fitting the aluminum to the speed ring, I found the center of my circle and drilled a 2 1/4" hole in the center. This was to allow my four-way connector for my fluorescents to connect to the plate. From Westcott I used their  1 to 4 light adapter from photobasics.net. Dropping the light adapter into the hole, I then screwed the adapter into the backing plate to secure it. Once it was all fitted, I placed the aluminum ring back into the speed ring and attached the screws which are part of the speed ring. Then I screwed on a light adapter to the back of the unit which has a switch. Then I added my softbox. 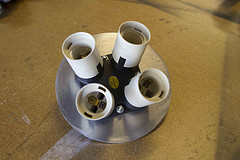 The conversion for my softbox was only about $45. Ideal lighting for this is using 27W (100W equivalent) daylight fluorescents (2 for about $4 at Home Depot). Having used these for several months I am happy with the outcome and they work great. It's a simple solution if you already own softboxes and want to convert them, yet be able to still convert back to strobes. For small portrait settings, this setup works great. And if I'm in need of a great amount of power I just convert back to my strobes by just popping out the adapter plate from the speed ring and replacing the strobe adapter. I have an inexpensive set of softboxes, which are flashpoint II units from Adorama. If you built the entire thing from scratch you would probably save about $200 this would include the stand, softbox, and parts to make the continuous lighting head.
Posted by PhotozBlogger at 8:22 PM